By all accounts, the music biz has been pretty hard hit by the pandemic. Lockdowns in virtually every country put an end to the rehearsals, performances and recording sessions that normally keep musicians connected and creative.

But surely musicians could use Zoom and FaceTime to play together, right? Wrong. The inherent latency of virtual meeting spaces makes it nearly impossible to play in time with another musician.

Why is it so hard?

The problem begins and ends with latency. That’s the time it takes for data to be transferred between its original source and its destination. In the case of virtual music creation, the data we’re talking about is the audio signal produced by each participating musician.

The timing of musical notes is crucial. Latency as low as 5 to10 milliseconds can mean the difference between a groove that makes you shake your rump and one that lays there like a cold, dead fish. Virtually connecting, say, a drummer and a bassist requires extremely low latency for any rump-shaking to occur.

Tech to the rescue?

Spoiler alert: There’s no easy or perfect way to bridge this particular divide. Creating a low-latency, high-quality connection among musicians is difficult. Many have tried; fewer have succeeded.

Right now there are 3 popular virtual-jam contenders: JamKazam, Jamulus and JackTrip. Each has its own pros and cons. The pros are compelling indeed. But the cons may leave you wondering, is it worth it?

Giving the virtual session game a shot may require heroic feats of IT trouble-shooting. Another alternative is to simply give up on the ideal of creative transcendence and instead settle for “good enough.”

Getting into a jam

At first blush, JamKazam seems to be the most accessible of the 3 services. Its “freemium” pricing structure offers 4 tiers ranging from free to $20 a month.

Paying for Premium gets you features that include unlimited playing time, 1080p video, 1:1 email and chat support, and an audio bitrate of up to 512 kbps. 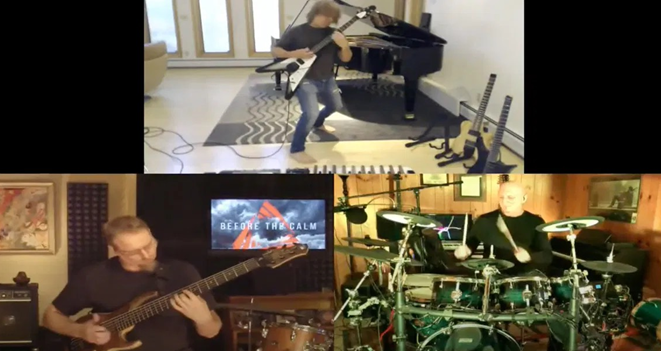 In addition, JamKazam lets users either create their own sessions—whether alone or with other musicians—or join public sessions. Musicians can also use this software service to conduct teaching sessions, make recordings and livestream performances.

Jamulus, by contrast, is a bit more of the DIY variety. Available for Windows, MacOS and Linux, this open-source software requires an onboarding process that may have some musicians reaching for the ripcord before they play even the first chord.

However, Jamulus is free. That’s possibly the only phrase your average musician loves more than “free beer at the gig.”

As is often the case with open-source software, Jamulus does not offer official tech support. Instead, you direct your questions to a community of regular users. Of course there’s no guarantee you’ll get a useful answer.

Jamulus discussion board, aka tech support

Also with Jamulus, the physical proximity of the musicians has a direct bearing on the latency. In other words, a guitarist in Chicago will sound better with a keyboard player in Boston than in Belarus.

The best-sounding of the three options is JackTrip. It offers HD audio quality at up to 96 kHz.

Developed in partnership with Stanford University’s Center for Computer Research in Music and Acoustics and various Silicon Valley software entrepreneurs, JackTrip offers the best performance for the price.

Musicians can operate JackTrip in either peer-to-peer (P2P) or hub-and-spoke configurations. P2P creates a direct connection between each player, which lowers the total latency. Hub-and-spoke manages the session from a central server, requiring less computing power from each participant.

When it comes to pricing, however, JackTrip tends to be a little cagey. Instead of actually listing a price, the JackTrip FAQ page coyly suggests that perhaps every musician on the session would like to own a $149 dedicated audio interface and microphone to match. (For the record, you can use your own.)

But JackTrip does make it plain that the managed servers behind its Virtual Studio service are free, at least as of today. But come this July 1, pricing will range from $1 to $25 a  month, based on the number of musicians and hours used.

Strike up the band

As you can tell, virtual jamming is neither cheap nor easy. But some options deliver varying degrees of facility. That’s more than any musician could say even 10 years ago.

The key to this particular journey is patience and perseverance. Even when the pandemic ends and it’s safe to venture back into the studio, virtual jam software will continue to progress.

And as the software gets better and easier to use, creative minds around the world will use it to connect. Only good can come from that.

In other words: Yes, it’s worth it.