Are you or your customers listening to awesome sounds on terrible computer speakers? If so, it’s time for an upgrade.

Those tiny drivers embedded as an afterthought in our laptops are robbing us of the multimedia experience we so richly deserve. But fear not, the right solution is out there. You just need to know where to look.

The key to success? Pick the right speakers for the application. What’s that mean in real life? Let’s take a look.

Gaming audio for the win

Gaming audio places big demands on speakers. Today’s gaming sounds could be coming from a remote corner of Earth, a doomed planet in outer space, or just the far edge of the sound designer’s imagination.

One good option is the Logitech G560 gaming sound system. It promises to deliver a multiverse of sounds—as well as programmable LED lighting—for under $200. The 2.1 system includes two desktop speakers plus a down-firing, ported subwoofer.

Rated at 120 watts RMS (240W peak), the G560 brings a lot more power than you’d ordinarily get from a set of computer speakers. Logitech knows that the roar of a spaceship or the rumble of a tank needs to be delivered in full, chest-thumping style. 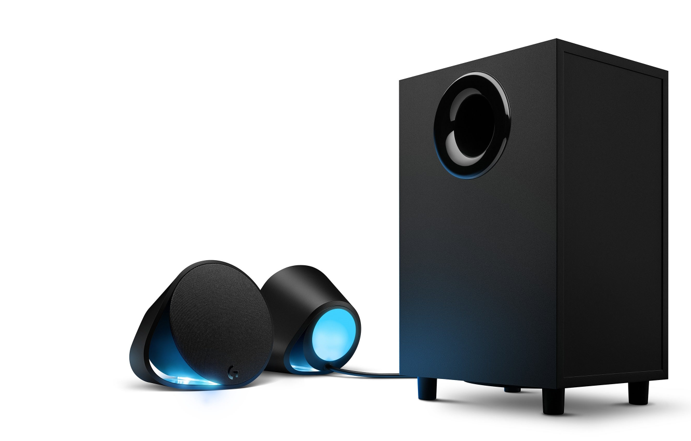 The G Hub app also gives you the option of syncing the speaker-mounted LEDs to whatever game you’re playing. You can assign the lights to respond to 4 separate areas on the screen. This feature adds the effect of bias-lighting, which enhances game visuals while also reducing the need for ambient room light.

The G560 sound system is temporarily sold out on Logitech’s site. But it’s still available from retailers including Best Buy.

We hardly ever hear the world’s best music as its creators intended. A truly great mix, when played through compressed MP3s and cheap earbuds, can’t help but lose many of its nuances.

If you’re ready to hear what you’ve been missing, the famed audio engineers at Klipsch are ready to show you. 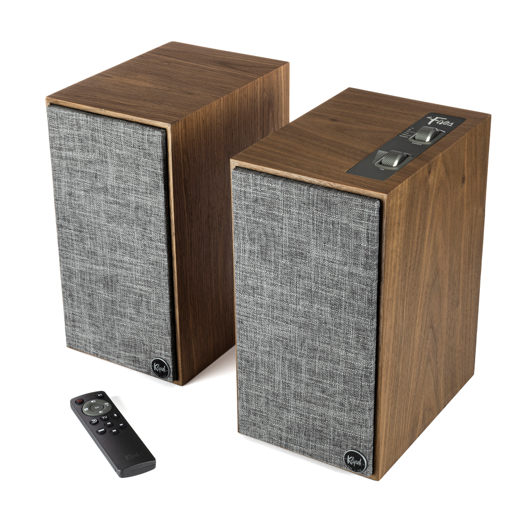 But are The Fives worth the extra bread? You bet. When it comes to sound quality, connectivity and style, Klipsch actually makes it feel like you’re getting a bargain.

These speakers measure 12 inches high x 6.5 inches wide x 9.25 inches deep, making them small enough to sit on your desk or a bookshelf. Then again, with their integrated Bluetooth connectivity, you could put them just about anywhere.

Their other connections include stereo-RCA, USB (type-B), optical, HDMI-ARC (for TV), and even a phono input for your high-end turntable. There’s no need for a subwoofer (though there’s an output for one), and no call for any more than the 160 watts that come in the box.

Turn on The Fives, dial in some Radiohead, and close your eyes. Then you’ll know why you paid nearly a grand for these things.

A word about psychoacoustics

Psychoacoustics is the study of how we perceive sounds. More to the point, it’s proof that speakers are just one of many components that make up the quality of the sound that actually reaches our ears.

Another important component is the room or other physical space. When you’re helping a customer pick the right sound gear, ask about the space they’re trying to fill. Even the world’s best speakers can sound sad and flat in the wrong environment.

For instance, if you place rear-ported speakers a few inches from a blank wall, the larger sound waves will bloom and disperse, producing a lot of low end.

The size of a room matters, too. Put that blank wall in a small room with a low ceiling, and you can skip the subwoofer. It’s just going to make things muddy.

Or, if you have a cavernous space filled with dense furnishings and diverse shapes, that will break up the sound waves, possibly causing unnatural reflections. To combat those effects, you may need to increase the speakers’ size and power. Consider a 2.1 or 5.1 surround system with solid tweeters and smart crossover.

One thing’s for sure: You have myriad options to consider from a whole lot of manufacturers eager for your customers’ cash. The key to picking the right system is a lot of research, a little trial and error, and a bit of good luck, too.

Choose wisely, and the combination of customer satisfaction and increased revenue should make some beautiful music together. Or, ya know, some beautiful explosions.