They just keep raising the bar, don’t they? One day, you have the world’s best gaming rig. The next, you read about some boffo new gear that practically demands more mileage from your already beleaguered credit card.

If you’re currently attending meetings for Gearaholics Anonymous and need to get that monkey off your back, stop reading now. (The first step is admitting you have a problem.)

But if you’re on the lookout for a way to make your or your customer’s gaming habit look like a million bucks, boy, do we have a monitor for you. Actually, three.

You probably won’t be surprised to learn that the craziest/coolest über-display on the list is made by Alienware.

Even less surprising is the Alienware 55 OLED gaming monitor’s nearly perfect feature set. This includes a 55-inch OLED display; a bevy of HDMI, DisplayPort and USB 3.0 ports; and customizable RGB lighting on the back.

What may come as a surprise is the price. At just over $3,000, the Alienware 55 OLED costs more than your average gaming PC.

Is this monitor worth so much dough? Well, yes and no.

On the positive side, there’s no question that OLED is king of the hill in terms of response rates, black points and general performance. If you’re looking for photorealistic immersion, then a giant OLED panel is the way to go.

But the plus-sized Alienware 55 OLED also has some drawbacks. For one, it’s not very bright. Topping out at 400 nits means this monitor works better in a darker room, which isn’t always convenient.

Also, in smaller rooms, the Alienware monitor’s sheer size may be a negative. Sure, a screen this size can paint a glorious picture. But remember, this is a monitor, not a TV. That means the recommended distance between your eyeballs and this 55-inch display is an expansive 7.7 feet.

If you’re not prepared to put that distance — the equivalent of a pro basketball power-forward — between you and your screen, then you might need a different device.

The Acer Predator CG7 offers a 43-inch display that can be used as a TV replacement, but feels a lot more like a monitor. The price is also easier to swallow, clocking in at around $1,200, or less than half the price of the Alienware 55 OLED.

However, the Acer’s vertical alignment (VA) panel won’t give you anything like that gorgeous OLED look. For one, the blacks simply aren’t as black. 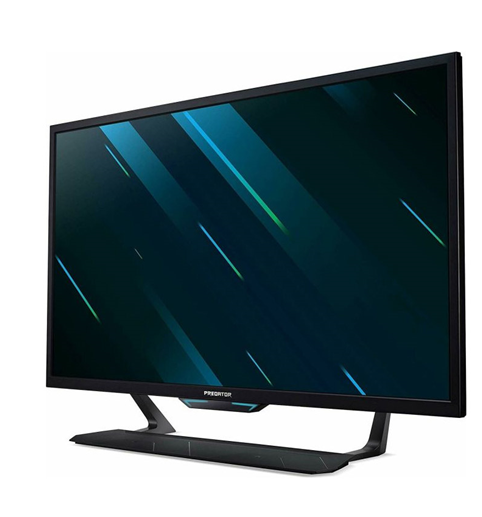 What the Acer does provide is an insanely fast 1 msec VRB response time, 178-degree x 178-degree vertical/horizontal viewing angles, and an overclocked 144Hz refresh rate. Combined with 4K resolution and Vesa Certified DisplayHDR 1000 color, it can deliver all the immersion you might crave.

We don’t know a lot about the new mega-displays coming from Dell, but we do know they’re slated to arrive in the U.S. by the end of June.

Like the Acer, Dell’s new glass will be a VA display with a 144Hz refresh rate. However, it’s not clear whether that refresh rate is native or overclocked.

No, these Dell screens don’t have light-up Alienware logos on the back. Nevertheless, they look cool in a staid, no-nonsense sort of way. The picture provided by Dell (see below) shows svelte black bezels, a sturdy mono-foot, and easily accessible USB ports on the bottom. 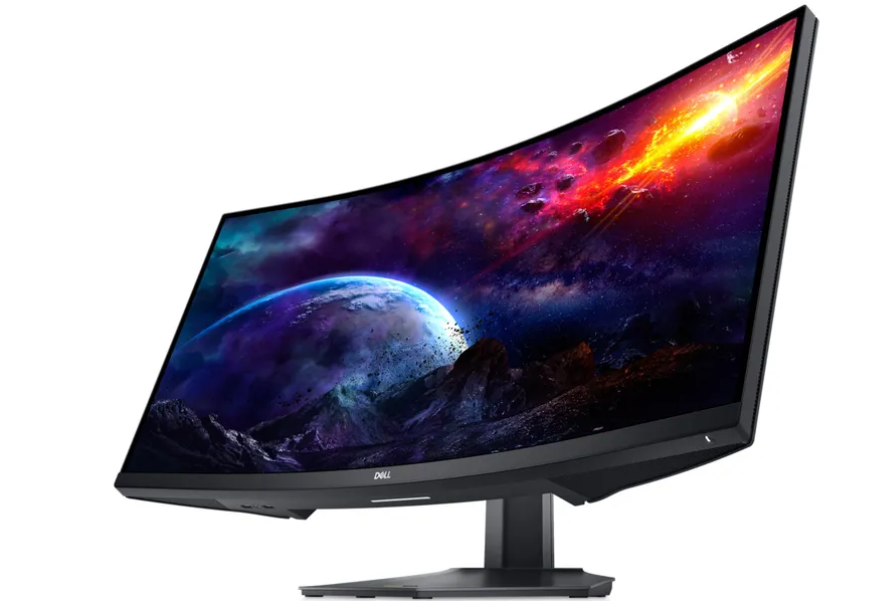 The preceding short list of displays is just that: short. But there are plenty of other fish in the sea, and more are hatching every day.

The trick is to find the perfect display for a given use-case. How far will the budget stretch? Are deeper blacks more important than screen brightness? What’s the ideal 4K refresh rate?

Answering these and other related questions should help you first narrow the field, then zero in on a display that’s absolutely perfect.

Until, that is, something better comes along.