Gaming is moving from the console to the cloud. That’s good news for both casual and enthusiast gamers who want variety, convenience and instant gratification. And who don’t want to spend a bundle on specialized hardware.

But how does cloud gaming (CG) work? Think of it as Netflix for games. Just as streaming movies took the focus off DVDs and videotapes, CG takes the focus off costly gaming PCs and consoles like Xbox.

Instead, CG relies on powerful remote servers, devices able to send 60 frames per second (fps) screaming down the pipes to your personal device. That makes CG — sometimes known as Gaming as a Service — like a movie you can control from just about any screen, anywhere, anytime.

That said, gamers ready to take control will still need at least 1 piece of hardware: a gaming controller. Preferably one that includes a d-pad, joysticks and a full complement of buttons and triggers. 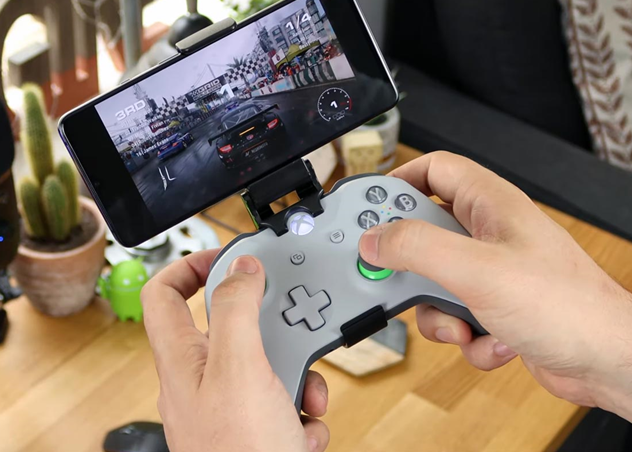 Microsoft xCloud: keep the game going while on the move

But choose carefully. Not all controllers are compatible with each CG platform. That’s why Google offers a specific controller for Stadia. Both Microsoft and Sony offer proprietary controllers for their cloud gaming systems, too.

Stadia for the win (because Google)

Gaming in the cloud isn’t all fun and games. Popular CG platforms from the likes of Google, Microsoft, Sony and NVIDIA require some serious server-side hardware. To make cloud gaming work, a lot of variables have to fall in place. Take, for example, Google.

Google may not run the whole internet, but sometimes it seems that way. And Google’s cloud gaming platform, Stadia (starting at $9.99/mo.), will likely bolster the company’s virtual dominance.

The secret to Google’s cloud-gaming success is infrastructure. Google has some of the most powerful, fiber-optic-connected server farms in the world.

What’s more, Google has also managed to spread those server farms around, and a great deal more than most of the competition. Chances are good there’s a Google server near you right now.

Why is a nearby server farm so important? Because close proximity is a key factor in lowering latency — the time a remote gaming server needs to respond to your commands.

For cloud gaming, the lower the latency, the better. In fact, you could say low latency is what makes cloud gaming even possible.

Latency isn’t much of an issue when you’re streaming a movie. Let’s face it, a few extra milliseconds before the opening credits probably won’t affect your experience one way or the other.

But for an avid gamer, latency is huge. When you’re in a boss-level battle for world domination, those same milliseconds can mean all the difference between glorious conquest and ignominious defeat.

To be sure, proximity isn’t the only factor that determines latency. Server processing power, network speed, code-base integrity and client-side device speeds can also increase or decrease communication time. Every variable has an impact.

Cloud gaming on the go

How about mobile cloud gaming? Yeah, Google is going for the win there, too.

Consider: Roughly 7 in every 10 smartphones worldwide run on Android, Google’s mobile operating system, according to Statista. With a user base that large, Google can easily roll out a constant stream of OS updates that add features and squash bugs. And with every Android update, the Stadia experience improves.

However, having the world’s most popular mobile OS doesn’t solve every issue. Some factors involved in mobile cloud gaming go beyond the control of even the internet’s behemoth.

For one, not all mobile devices are created alike. Devices with slower processors and older screens will stand in the way of a great mobile gaming experience.

For another, there’s the issue of mobile data connection speeds. Google recommends that for mobile gaming, you have a connection of at least 10 megabits per second (Mbps). Fortunately, most high-speed wireless networks can provide that.

But to stream the latest popular titles like “Assassin’s Creed” and “Metro: Exodus” in 4K at 60 fps, Google says you’ll need at least 30 Mbps. Only the fastest and most consistent 4G and 5G connections can provide that kind of bandwidth.

And the high cost of mobile data? Yeah, that’s part of the mix, too.

Assuming you’re lucky enough to grab that kind of speed from thin air, you’ll be eating up your bandwidth allotment at a rate of 15.75 GB/hour.

To put it another way, at that rate, it would take only 65 hours to chew through a common 1 TB data cap. If you think 65 hours is a lot for gaming, just ask the nearest 15-year-old how much time they spent playing “Minecraft” last month.

Inexorable ascension to the cloud

Google’s Stadia is only one of many cloud platforms trying to change gaming forever.

Microsoft’s xCloud is currently in beta and looking mighty good. Yes, the company is a bit late to the party. But if anyone has the wherewithal to go after Google, surely it’s Microsoft.

And don’t forget Sony. The company’s PlayStation console has been king of the hill for many years. So it’s no surprise that Sony’s cloud gaming platform, PlayStation Now, is ready to pick up where the PS5 left off. The service offers literally hundreds of games on demand.

With competition like that, the cloud gaming market has got some serious game.