Remember when getting some privacy was as simple as shutting the blinds and taking the phone off the hook? Yeah, those days are long gone.

Welcome to the Internet Age, where everyone is snooping. From totalitarian regimes to the service provider that sends the internet into your home and office, someone is always looking over your shoulder.

There’s no simple solution. All you can do is employ some modern tech to stack the odds in your favor.

If you’re ready to start stacking, a virtual private network (VPN) is a cheap and easy way to go.

What’s this private network of which you speak?

Essentially, a VPN creates a secure, encrypted connection between your device and a remote private server somewhere on the internet. Because that server obscures the origin of any data request you make, you can remain anonymous.

Reliable, modern VPNs such as Mullvad (recommended by The New York Times) install easily on your computer or mobile device. The automatic setup, with your permission, routes your internet traffic through a secure server that’s located somewhere, anywhere on the net. 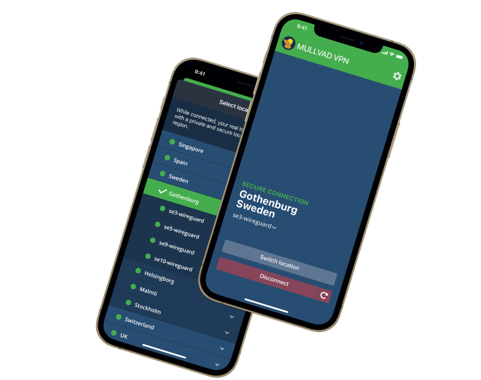 VPN app Mullvad secures not only PCs, but also phones

You can also install a VPN on your router or hotspot. You may get slower speeds than if the VPN were right on your device, but it does bring the benefit of convenience. That way, once the VPN is installed, every connected device will enjoy the same level of security. You won’t have to set up each one individually.

By obscuring your browsing, watching and communicating habits, a VPN essentially hides you from prying eyes. Those could be the eyes of your ISP. Or, for that matter, of anyone that has gained access to your data stream, whether legally or otherwise.

For example, if Kim Jong Un demanded to know whether you watched the “Friends” reunion, your VPN could keep the Supreme Leader in the dark. Hey, it could happen.

Do I seriously need a VPN?

No, not really. But should you seriously think about getting one? Well, that depends. Do you…

> Have concerns about government surveillance or censorship?

> Need a remote connection to your company’s intranet?

> Spend a lot of time on public Wi-Fi?

> Want to stream movies from another country’s Netflix library?

If your answer to any of those questions is Yes, then it may be time to shell out $2 to $20 a month for a reliable VPN.

The risk is low. Because a VPN is just another app, there isn’t much in the way of commitment. If the VPN makes you feel safer, keep going. But if it turns out to be just another unnecessary monthly expense, cancellation is only a click away.

VPNs are designed to give you the warm-and-fuzzies while you’re surfing and streaming. But no security solution is foolproof.

Your data has to go somewhere. If it’s not going straight to your ISP, then it’s going to the company that provides your VPN.

Is that a bad thing? Not necessarily. But you should know that law-enforcement agencies sometimes subpoena VPN providers to get data. And sometimes these VPN providers comply.

Another issue: A VPN can slow you down. Introducing other apps and servers into your data stream creates latency. With the VPN sitting in front of your internet connection, you could experience slower upload and download speeds.

The slowdown could be a remote issue, too. Your chosen VPN may boast thousands of fiber-optics-connected servers around the world. But the speed and efficiency of each server depends on several variables, including traffic, location, even local weather.

Watch what you don’t pay for

If you do go for a VPN, there’s one more catch: If something looks too good to be true, it probably is.

Many VPNs offer a free service tier. But ask yourself: If they’re not making money from your monthly subscription fee, then how exactly are they making money?

The answer might have something to do with selling your private data to the highest bidder. Buyer beware!

That said, a VPN you pay for could be your new best cyber friend. No, it’s not as easy as pulling down the blinds. But for our uber-connected age, it’s definitely a whole lot more secure.