If your PC-using customers haven’t yet asked you about Thunderbolt 3 technology, they will soon.

And rightly so. With transfer speeds up to an astonishing 40 Gbps, a Thunderbolt 3 port is today’s gold standard for moving data to and from peripheral devices in a hurry. 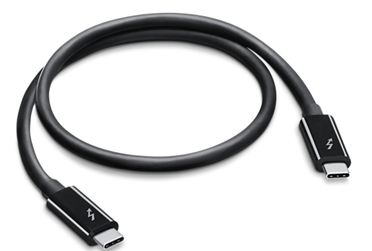 But Thunderbolt is also a tricky needle to thread. While it may be the fastest interface, widespread adoption eluded both earlier versions, Thunderbolt 1 and 2. That was due to relatively high costs, technical hurdles and a marked lack of external devices.

Is Thunderbolt 3 different? Yes, but only if you’re armed with 3 important facts:

In a stroke of genius, the powers that be decided to give both standards the same plug.

It also means those cables will, at the very least, deliver a 10 Gbps data stream. Plus enough power to charge your cellphone.

Compatibility with USB-C is a small but powerful detail. And one that should save OEMs and consumers alike both time and money.

The key words to look for are “active” and “passive.”

Active cables, by contrast, include an integrated chip. This component is needed to achieve the maximum 40 Gbps throughput.

For an active Thunderbolt 3 cable, your customers should expect to pay $30 to $60. Yes, that’s a lot for a cable. But if they’re streaming 5K content or data from an SSD RAID-array, it’s the only way to fly.

On the surface, an Ultrabook such as the Thunderbolt 3-equipped ASUS ZenBook 3 Deluxe appears to be a “yes, but” device.

Is it thin and light? Yes, but there’s not much storage space. Can you play games and edit media? Yes, but the graphics card isn’t very powerful. Does it have a good display? Yes, but it’s small and can’t handle 5K content.

With Thunderbolt 3, all that changes. Resolution junkies can stream in full 5K glory by connecting a UHD display via an active Thunderbolt 3 cable.

Ultrabook-toting gaming fanatics can connect an external graphics processor such as the AORUS GTX 1070 Gaming Box. Connected with a Thunderbolt 3 cable, this device, which retails for about $600, turns an ultrabook laptop into a high-speed gaming platform for graphics-intensive and VR-ready games.

What’s more, exabytes of super-speed SSD storage are just a click away — no desktop required. Just connect an external RAID-array such as the AKiTiO Thunder3 RAID Station. This device, retailing for about $370, connects to a laptop with a single Thunderbolt 3 cable, giving the user connections to any dock, display or data device.

As Thunderbolt 3 adoptions grows, so too will the options you can offer your customers. So start the conversation now. You’ll be doing your customers, and your business, a favor.