This Win10 convertible features a 15.6-inch 4K OLED display, up to a 10th Gen Intel Core i7 processor, Nvidia GeForce graphics, and Wi-Fi 6 connectivity. Battery life is promised at up to 17 hours.

Shipments of the Spectre x360 15 are set to begin in March, with retail prices starting at just under $1,600. 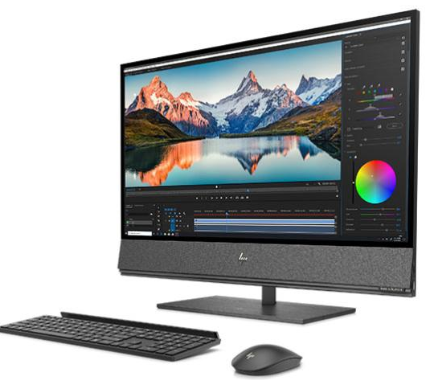 For audio, the device has built-in tweeters and a subwoofer, supplied by the audio wizards of Bang & Olufsen. No extra speakers are needed for editing. You can also use the speakers for streaming music from a phone, even when the Envy device is powered off.

The monitor’s base also functions as a wireless charging station for compatible phones. You simply lay the phone on the base, and it charges up.

The device’s multitasking keyboard lets the user connect up to 3 devices and easily switch from 1 to another. Pretty cool.

There are ports galore: Thunderbolt 3, USB-C, USB-A, 2 HDMIs and Ethernet

HP introduced this lightweight notebook PC back in September, but what seems to be new is a feature called Tide. It’s a “smart location” app that helps users find the device if it’s misplaced or lost. Also new is optional 5G connectivity.

HP is going green, too. On the Elite Dragonfly, over 80% of the mechanical parts are made from recycled materials, according to the company.

Shipments are set to begin next month. HP didn’t disclose prices, but an earlier version had a starting retail price of about $1,550.