Apple Watch is widely regarded as the undisputed heavy-weight of wearables. But as a recent report from ABI Research shows, the competition has grown serious. Apple Watch recently suffered a 14% drop in its market share.

Is Apple’s reign coming to an end? In a word, no. But the competition sure is getting better. A serious battle is on.

One front in that battle is price. All Apple products are comparatively expensive, and the company’s watches are no exception. Retail prices for Apple Watches start at $400 to $800, depending on model and features.

The stakes are high. ABI predicts that over 67 million smartwatches will ship worldwide this year. Your customers may be among those millions of buyers. Here’s your update on some tough Apple competition from Fitbit, Samsung and LG.

If you see someone wearing a smart watch not made by Apple, chances are it’s a Fitbit. The company’s latest, the Fitbit Versa, is the most Apple Watch-like wearable on the market. From a distance, you might not even be able to tell the two apart.

But when it’s time to get out the credit card, your customers will certainly know the difference. The Versa retails for around $200 — just half the price of an entry-level Apple Watch. 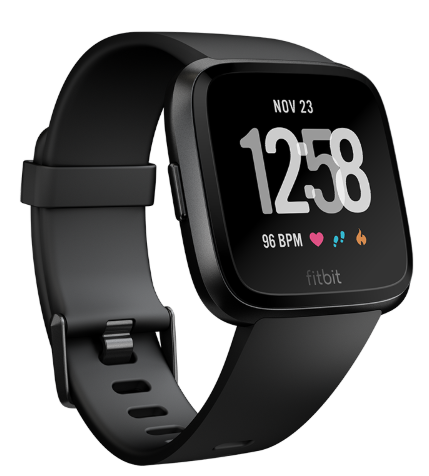 Fitbit Versa: half the price of an Apple

Despite the low price, Versa deftly delivers some of the wearable market’s greatest hits. That includes heart-rate and fitness tracking, multi-day battery life, and cross-platform compatibility with both iOS and Android.

However, some Versa users have complained about the device’s clunky music playing and transfer, lack of on-watch messages or calls, and a payment system that has so far attracted only a fraction of Apple Pay’s participating merchants.

Samsung’s new Galaxy Watch has a huge built-in crowd: Android users. If your customers value features over fitness, Galaxy Watch should be part of your conversation.

Retailing for around $350, Samsung’s latest wrist candy is much closer in price to Apple Watch. Then again, it’s also much closer in functionality. Like they say, you get what you pay for.

However, it’s a little ironic that the best watch for Android doesn’t run Google’s Wear operating system (Android for watches). Samsung opted instead for its own in-house OS, Tizen, to make the Galaxy Watch’s unique bezel control work.

It’s a bittersweet trade-off. That bezel dial is something many Apple Watch users would like to have. But the Tizen OS has almost no third-party apps. For feature-hungry users, that’s likely to be frustrating.

If your customer says yes to Android but no to Samsung, tell them about the LG Watch W7.

While you’re at it, you can also tell them how nice it is to wear a smartwatch without looking like you’re wearing a smartwatch (the word “dork” comes to mind). Watch W7 is the world’s only viable hybrid smartwatch. And it’s got hands — actual hands!

Is it expensive? You betcha. But not more expensive than Apple, right? Actually, yes, it is. If your customers want to go hybrid, it’ll cost them around $450 for the base model.

But they’ll look damn good doing it. Who can put a price on that?