The rapid evolution of hybrid meetings has brought with it an array of next-gen meeting tech.

From smart cameras that zoom in and focus on each speaker to digital whiteboards accessible to both in-person and remote participants, hybrid-meeting gear makes it easy to collaborate with a team no matter where in the world you happen to be.

What makes a successful hybrid meeting? The answer is twofold.

Second is the right technology. You knew that was coming, right?

Bad sound can bring a hybrid meeting to its knees. You can usually get away with spotty video. But when people can’t hear each other, it’s pretty much game over.

Sennheiser’s nearly $500 TeamConnect Intelligent Speaker boasts above-average sound. But it takes more than that to win an iF Design Award and earn Microsoft Teams certification. 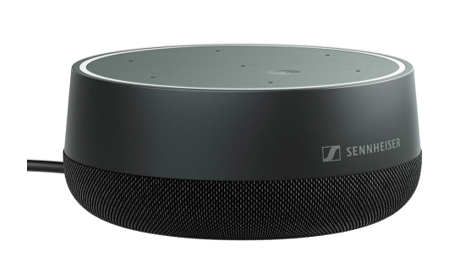 One of the speaker’s most valuable features is the ability to distinguish among 10 different voices. It does this either in the room via 7 beam-forming microphones or by remote audio input.

After learning the individual voices of each participant, TeamConnect then transcribes every word and creates a running transcript that looks like a Slack chat. The transcription is stored securely on a remote server for easy reference at any time.

Once the primo sound is taken care of, the next step is a smarter-than-your-average-bear video system.

Enter the UVC84 by Yealink. It’s a Microsoft Teams-certified smart camera designed for medium and large rooms. This camera mounts on either the ceiling or a wall. 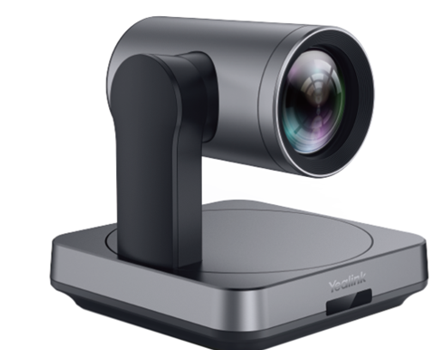 You could be forgiven for thinking the UVC84’s most valuable features are its 4K resolution, 12x optical zoom, 80-degree field of view, and software-controlled mechanical pan and tilt. But you’d be wrong.

In fact, the UVC84’s best bell/whistle is its ability to automatically focus and zoom in on whichever attendee has the floor at any given time. Even in a room chock full of participants, the camera seeks out the current speaker. It also fills the screens of all remote participants with the speaker’s head and shoulders.

That kind of artificial intelligence doesn’t come cheap. The UVC84 will set you back around $1,000.

Don’t call it a whiteboard

Once the sticker shock subsides, it’s time to revel in the majesty of what must be one of the most interesting collaborative technologies around. 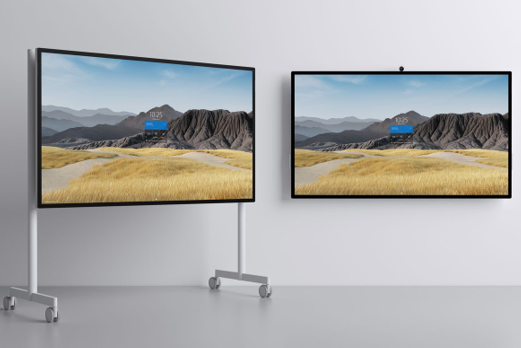 Yes, the 2S is a digital whiteboard. But it’s also much, much more than that.

Its standout features include an 85-inch, high-res touchscreen; 8th gen Intel Core i5 quad-core processor; integrated camera; and Doppler occupancy sensor. (Okay, that last one is a little bit creepy. But still.)

At this point, you may be thinking that Surface Hub 2S is basically a giant all-in-one PC. Technically that’s true—except for the way you interact with it.

This behemoth interactive screen is designed to either mount on a wall or perch on an easel. Place it at the front of a meeting room, and you’ll see people walk up to it as it becomes their turn to present. Not exactly your run-of-the-mill Windows machine.

What’s even more interesting is how the Surface Hub 2S enables remote workers to easily collaborate in a common virtual space. Any participant connected through the Microsoft Teams session can take control of the screen to share and edit ideas.

Those lucky/unlucky enough to be in the office will see screen elements move in real-time as remote workers put in their two cents. The same is true for those at home with their feet up on the couch.

There’s so much hybrid meeting tech around—and so much more on the way. The key to a good solution lies in choosing the tech that makes the most sense for you and your customers. And as the prices above show, that includes your customer’s budget.

But one thing’s for sure: Hybrid meetings are here to stay.

Pandemic or not, workers are going to be phoning it in for years to come. And for tech providers like you, that turns hybrid-meeting tech into growing opportunity.

Maybe you should have a meeting about that.