You can’t fight an enemy effectively if you barely know they exist.

Unfortunately, that’s pretty much what educators are up against when it comes to cybersecurity.

Schools have become major targets for cyber crooks. For example, during the months of August and September 2020, nearly 6 in 10 of all ransomware attacks reported in the United States involved K-12 schools.

That’s according to IBM and the U.S. Federal Bureau of Investigation. The FBI even issued a special cybersec warning this past December about attacks by “malicious cyber actors” on U.S. schools.

So how aware are educators of these threats? Not very, finds a new survey commissioned by IBM.

IBM wanted to better understand schools’ levels of preparedness, awareness and training. So last October it commissioned a survey of 1,000 educators and 200 administrators in both K-12 schools and colleges in the United States. The study was conducted by Morning Consult, a data-intelligence company, and the survey results were released just last week.

Here are some of the high (or should we say low?) points:

> Training lags: Nearly 6 in 10 educators and school administrators (59%) said they either haven’t received or aren’t sure whether they’ve received new cybersecurity initiatives or training for remote learning.

Similarly, more than half of the educators (54%) either haven’t received or don’t know whether they’ve received basic cybersecurity training.

> What, me worry? Only about half the educators and administrators (47%) surveyed said they’re either very or somewhat concerned about cyberattacks against their own schools. As the chart below (courtesy of IBM) shows, fully half are either not very concerned or not at all concerned. 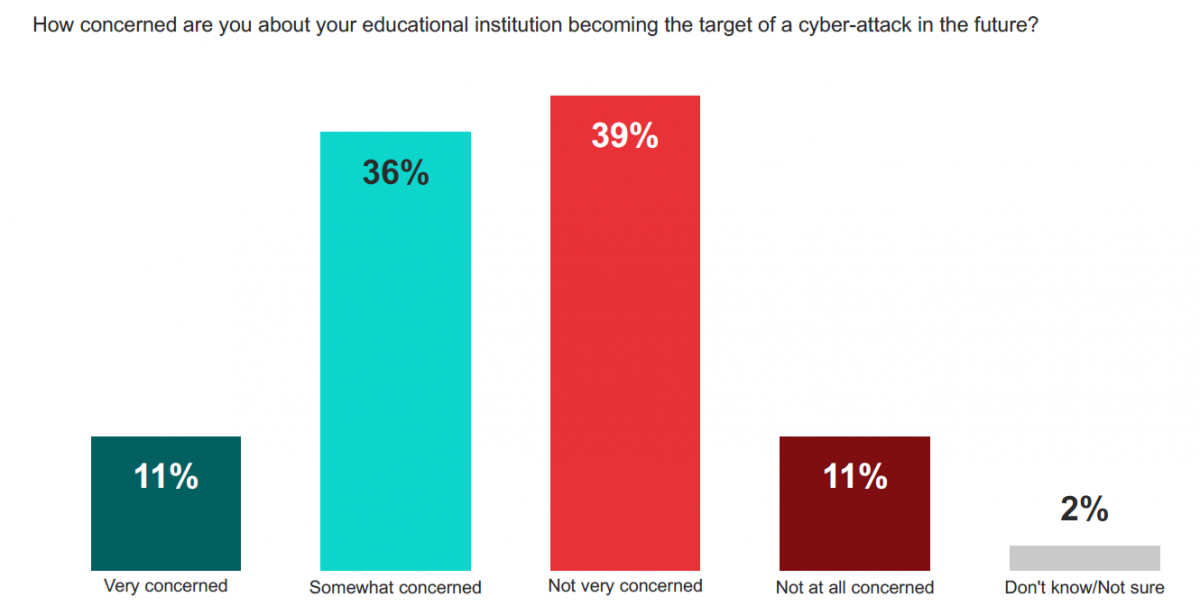 > Dangerous overconfidence: About 8 in 10 administrators feel confident that their schools could handle a cyberattack. Yet more than 6 in 10 don’t even know whether their schools have a cyber insurance plan.

> What's ransomware? Only 1 in 3 educators and administrators (33%) said they’re concerned about ransomware attacks on their schools. And over 4 in 10 (43%) believe that if their schools are attacked, they should not pay the ransom.

> BYOD, beware: Nearly 6 in 10 educators and admins (59%) are using personal devices for remote teaching. Among college educators, it’s more than 8 in 10 (81%). Yet over a third (34%) of educators said their educational institution has not provided any guidelines or resources to protect devices being used for remote learning,

> Lack of IT support: Only 1 in 4 educators (39%) said they receive a great deal of support from their school’s IT department.

> Money matters: Over half of all those surveyed (54%) said one large or medium barrier to strengthening their cybersec posture is the budget.

Pretty disturbing, right? IBM agrees. That’s why the company recently committed $3 million in in-kind grants to help U.S. schools strengthen their cybersecurity. How about you? Now’s the time to help your education customers get cybersafe.