Hybrid work is the new normal. For the foreseeable future, hardly anyone’s going back to the office Monday through Friday, 9 to 5.

Instead, workers are now found in offices, at home, on park benches, in airplane seats, and just about anywhere else that offers a flat surface and a decent internet connection.

However, working from these various locations is still harder than it should be. Mainly, that’s due to a decided lack of device interoperability.

You might think that by now, all the major platforms — Windows, macOS, Android, iOS, Chrome et al. — would be fully interoperable.

But just try sharing a file in a proprietary format with another platform, and you’ll see how wrong you are. An iPhone won’t play nice with a Windows 11 ultrabook. That Android tablet prefers not to shake hands with nearby PC monitors. Your smart TV doesn’t speak the same language as your in-car display.

The answer? Big Tech thinks it’s cross-device setups. If they’re right, this could be the perfect solution for the modern workforce. And a new business opportunity for tech providers.

Bridging the gap between devices

How do cross-device setups help the modern worker? The answer may be found in Intel’s recent acquisition of Israeli tech startup Screenovate.

Founded in 2009, Screenovate is working to commercialize cross-platform software. Essentially, the company’s software duplicates and displays the contents of a mobile device on the screens of other devices, such as PCs, smart TVs and 2-in-1 convertibles.

Intel’s purchase of Screenovate is a prime example of how Big Tech is working to bridge the gap among the many devices we interact with every day.

Intel isn’t alone. Other tech titans, including HP and Microsoft, are getting into the game, too. Their goal: give workers a smooth transition between all their devices. That includes mobile phones and tablets, desktop and laptop PCs, and secondary devices such as smart displays.

Connecting devices is the purpose behind Microsoft Graph. It’s a new API-based platform designed to replace workers’ device-centric activities with what Microsoft calls a human-centric approach.

When workers move from one device to another, they can lose data, time and patience. Microsoft says Graph can help by enabling software designers to build-in a menu of recent activities.

Then the contents of this menu are stored in the cloud. From there, they’re pretty much available from any connected device.

7 a.m.: Your customer wakes up. Looking at their bedside smartphone, they see a display of yesterday’s collaborative project.

7:30 a.m.: While eating breakfast, your customer has the latest edits to the project read aloud by a smart speaker.

8:30 a.m.: Your customer drives to work. On the way, they have the car’s dashboard screen host a chat or conference call and display the PowerPoint presentation controlled by a remote worker.

9 a.m.: Your customer is now seated at a traditional office desk. Now they can click a button to call onto their work PC all the latest data from that productive morning commute.

Or, if your customer is working from home that day, all these devices (excepting the car’s dashboard) can similarly share data, files and more.

The HP Dragonfly features a videoconferencing enhancement called HP Presence. The device also offers myHP, an application that gives users a dashboard to control and customize their PC experience. 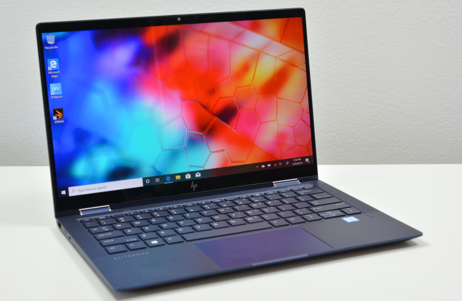 Also, a new generation of devices enabled by the Intel/Screenovate screen-mirroring tech could kick off a mobile-tech buying spree.

Software will likely be a major player, too. New versions of faithful work staples like Word and Excel will gain new Microsoft Graph superpowers. To take advantage, your customers will need to update older software titles and perhaps buy new apps too.

The new normal of hybrid work will demand cross-device compatibility as a matter of course. Now’s the time to get the ball rolling — and that ball can now roll among your myriad devices.