1. Partner support: Partners have asked for more consistent updates from Intel and its executives, and these webinars are part of the company’s response. They’ll be held quarterly, with the next webinar scheduled for June. 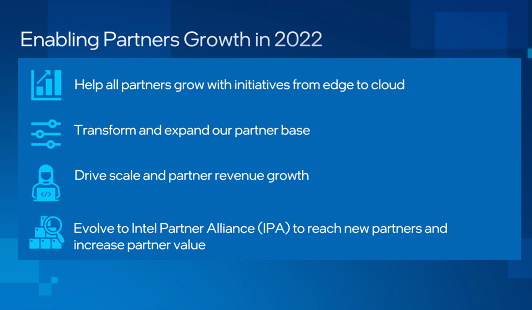 2. Strategic vision: Invigorated by CEO Pat Gelsinger, Intel believes insatiable demand for compute will double the overall market opportunity to $1 trillion by 2030. What’s more, Intel intends to regain leadership in every market it competes in.

Intel has also committed itself to working closely with the open source community. And through its IDM 2.0 initiative, Intel will both sell components to other companies and buy some from others. Intel is building its new fabs modularly — that is, in sections rather than as one big facility. This will allow select portions of a fab to open sooner than others, meaning Intel will be able to ship some product faster.

3. Graphics cards: New client GPU cards should be coming from Intel in the April to June timeframe. They’ll be sold by third-party board vendors. “We’ll be fighting back for market share,” Deleon told attendees.

4. NUC supply: During the Q&A period, several partners complained of long lead times for Intel NUC Mini PCs. One partner was told by their distributor that high-end NUCs  were on back order for up to 10 months.

Gina Merjanian, GM of U.S. inside sales at Intel, acknowledged the issue, but said at least some of the blame goes to third-party suppliers of boards and other NUC components. “Lead times should improve,” she told attendees, “but 2022 will still be tight.”

5. What’s coming: Today’s attendees were told about forthcoming Intel products that include: Sapphire Rapids, a next-gen Xeon processor for servers, coming in this year’s first half; Raptor Lake, a new desktop processor coming in the second half; and Meteor Lake, another client processor, due in 2023.

> Not yet an Intel Partner Alliance member? Learn about IPA’s benefits and join now.