While Intel’s Irix Xe graphics tech was a big part of the company’s recent introduction of the 11th gen “Tiger Lake” Core processors for mobile PCs, you should expect to see Intel Xe GPUs in a lot more places. That includes gaming laptops and data-center servers.

That’s because Xe is a new, highly scalable GPU architecture that’s actually the basis for 4 of what Intel is calling discrete “micro-architectures”: Xe LP, Xe HP, Xe HPC and Xe HPG. Here’s a look, courtesy of Intel, of how they line up: 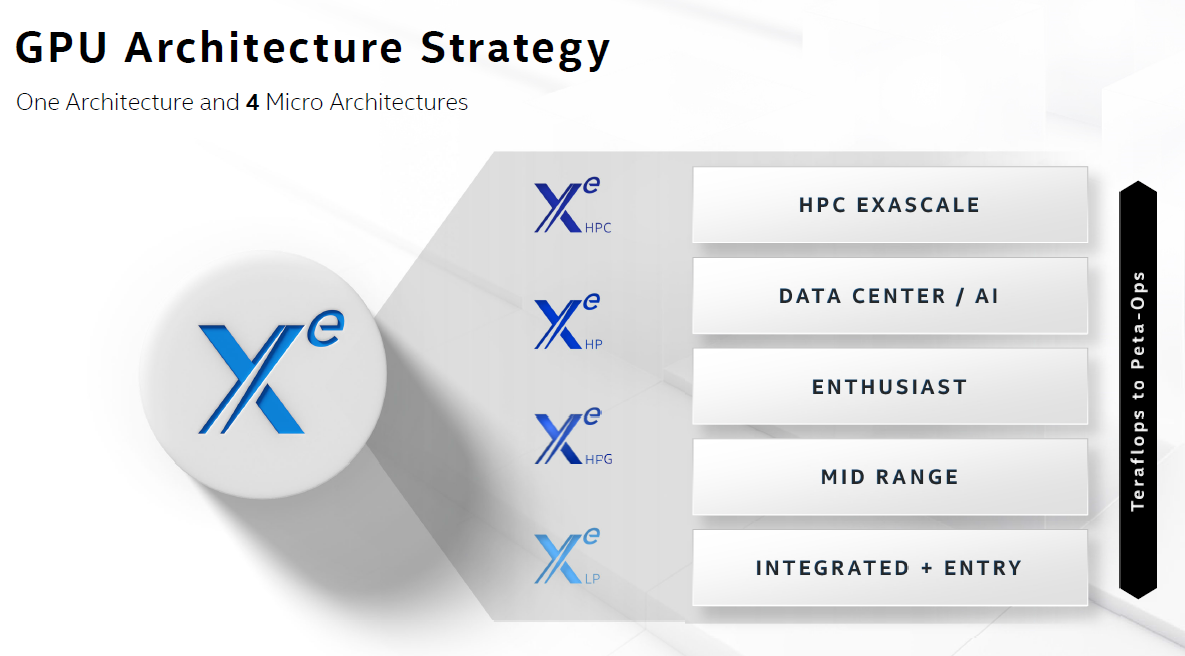 These Xe micro-architectures were revealed during Intel’s Architecture Day 2020 last month. But in light of Intel’s Tiger Lake announcement, made earlier this month, they make a lot more sense, and we can see how the puzzle pieces fit.

At the start, Intel had set an ambitious goal of increasing performance per millimeter, per watt and per flop. “This,” said another Architecture Day speaker, Intel senior fellow David Blythe, “was a pretty daunting task.”

To get there, Intel opted to create an entirely new GPU architecture from the ground up. The designers created a 1.5-times larger engine offering up to 96 execution units (EUs).

The EUs were redesigned, too. Among other improvements, the number of vector lanes scheduled by an EU has been doubled from 8 to 16, according to Blythe.

Here’s an overview of Intel Xe’s 4 microarchitectures, as outlined by Koduri during Intel Architecture Day 2020:

> Xe LP: This is the foundation GPU, optimized for graphics efficiency. It’s based on Intel’s 10nm SuperFin technology, used throughout the new Tiger Lake system-on-chips (SoCs).

> Xe HP: Scalability is the focus of this graphics micro-architecture for the data center.  Built on Intel 10nm Enhanced SuperFin technology, Xe HP is designed to be a media supercomputer on a PCIe card. It will be packaged in 1-tile, 2-tile and 4-tile versions. Intel is sampling these now with software developers and key customers, and it plans to ship products based on Xe HP next year.

> Xe HPG: A variant of Xe HP optimized for enthusiast gamers, it will offer, among other features, hardware-dedicated ray tracing. It’s built on processor technology from other companies and is now being tested in Intel’s labs. The company plans to ship products based on Xe HPG sometime next year.

> Xe HPC: Offering compute efficiency for the data center, it’s the basis for Ponte Vecchio, a high-performance GPU Intel announced last November. Ponte Vecchio is being architected for HPC (high performance compute) modeling and simulation workloads, as well as for AI training. It will be built on 7nm technology using a combination of Intel Enhanced SuperFin and processor technology from other companies.