“An Intel Xeon Scalable processor is a terrible thing to waste.”

What Gary means is this: Delivering serious performance gains on your customers’ servers requires not just the latest CPUs, but also eliminating lurking bottlenecks and delivering powerfully matched storage and Ethernet components; a balance that unleashes the entire server platform.

Get that right, and there are some real benefits for your customers:

Sound good, right? Let’s explore why these gains require not just the latest, greatest processor, but a true integrated platform.

The Scale IT Up tool showcases a configuration comparison that illustrates how the gains accumulate, starting with a baseline configuration:

With CPU utilization rate at 85%, this setup can process about 10.3 million total operations. Network storage I/O comes in at 834 MB/sec., supporting 16 VMs.

Scale up just the processor: For the next configuration, swap in an Intel Xeon Gold 5318Y processor, a processor similar to the Gold 5220, but a member of the 3rd Gen Intel Xeon Scalable processor family. There are no changes to either the SATA-based D3-S4510 SSD or the 10GbE Intel Ethernet Network Adapter.

Now, with CPU utilization at 90%, we’re processing 15.6 million total operations, up roughly 50% over the baseline. Network storage I/O, by contrast, has barely budged at 853 MB/sec., but we’re still on 10GbE and now supporting 26 VMs.

Scale up the network: To address the I/O shortfall, Gary next upgrades the connection to a 25GbE Intel Ethernet Network Adapter E810, one of the company’s current 800 Series adapters.

The real improvement, naturally enough, comes with network storage I/O. It’s now 1.1 TB/sec. That’s over 30% better than the baseline. And we’re still at 26 VMs, but at 93% CPU utilization there is no more room for performance scaling.

Scale up the processor and storage: Gary takes it up a notch on two fronts. The new CPU is a 3rd Gen Intel Xeon Gold 6338 processor. That’s paired with NVMe Intel SSD D7-P5510 Series drives. These drives, unlike the baseline SATA drives, support NVMe over RDMA, or NVMe/RDMA.

With CPU utilization still at 90%, performance is now rated at 21.8 million total operations. That’s more than 2x the baseline performance.

Scale up the processor and network:

Now the gains are truly impressive. Performance is up to about 26.5 million total operations. Compared with the baseline, that’s an increase approaching 3x.

Network storage I/O is looking good, too. It’s now at about 8.7 GB/sec. Compared with the baseline, that’s up nearly 10.5x.

CPU utilization is actually lower, at 82%. And now we can support 44 VMs, more than double that of the base configuration.

As Gary G. says, scale IT up…or you and your data-center customers could be wasting valuable IT resources.

But wait, there’s more. All this advanced tech may be powerful, but it comes at a price. So how do these various setups compare on a cost basis?

At a high level, all the scaled-up configurations cost less than the baseline to deliver the same workload, according to Gary’s math. The following chart tells the story: 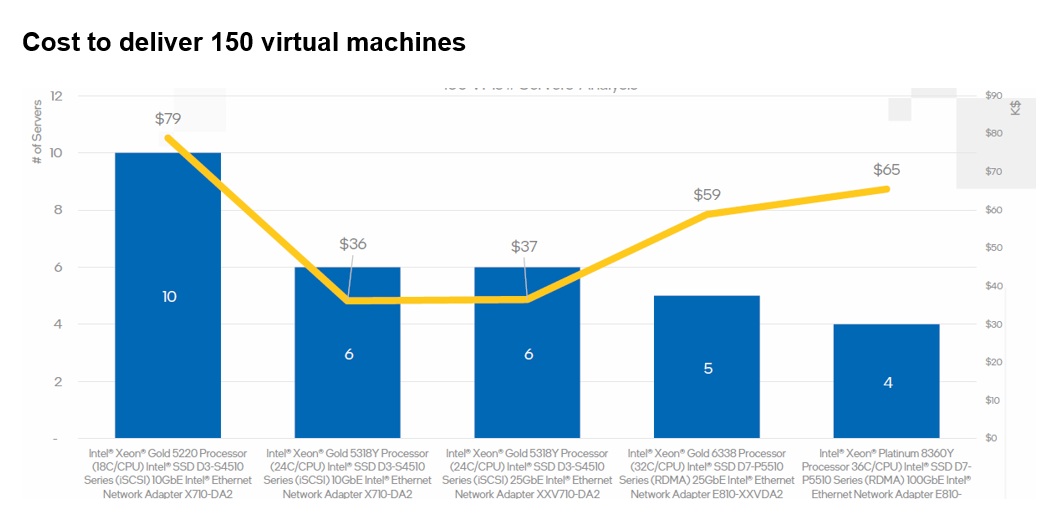 However, as Gary is quick to point out, that’s not the whole story.

Because the more advanced configurations (on the right side of the chart above) require fewer physical servers, they also enjoy fewer network bottlenecks. The following chart, also courtesy of Gary, shows how:

Put it all together, and you’re delivering the workload for 17% lower cost, while also delivering a 4.5x improvement in storage and network I/O.

Note: The comparative analyses used in this document were done by HeadGear Strategic Communications (Pty) Ltd. and commissioned by Intel. Results are simulated and provided for informational purpose only. Intel does not control or audit the third-party benchmark data or websites referenced here.

Scale IT up to unleash data-center storage:

> Intel Scale IT Up