Would your data-center customers like faster memory at lower cost? Then tell them about tiered memory. 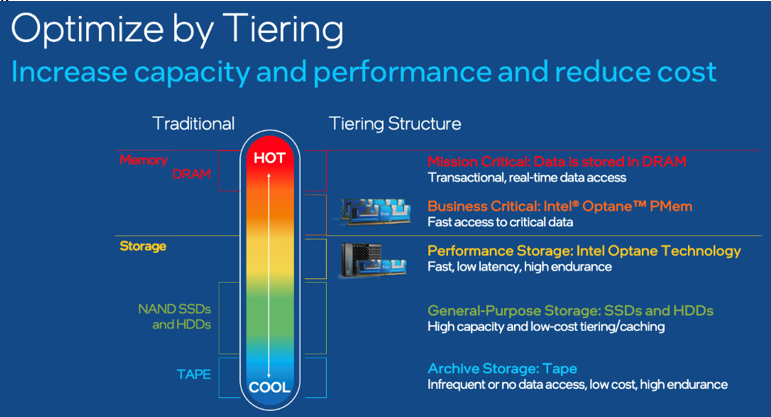 For storage, tiering lowers costs while also speeding application performance. Tiering does this by assigning different types of data to different types (or tiers) of storage.

For example, tiering puts hot data—information accessed and updated frequently—on the fastest storage media, such as SSDs. And it puts cold data—archives that are never updated and accessed only rarely—on slow media such as tape drives.

Now a similar approach is being applied to memory. And the benefits are similar: lower costs, plus the ability to process larger sets of data faster by bringing it closer to the CPU, thereby improving application performance.

Intel Optane PMem can be used as either volatile or persistent memory. It lets large datasets exist closer to the CPU, delivering faster processing and insights.

And when compared with DRAM, Intel Optane PMem technology offers the ability for data persistence and higher capacities, but at a lower cost.

Also, your customers can combine Intel Optane PMem with DRAM on different tiers to get data insights faster and with bigger memory pools. Intel’s own tests show that using Intel Optane PMem can double a server’s memory capacity while lowering costs by as much as 25% per virtual machine.

Do your customers use real-time analytics or AI workloads? If so, Intel says Intel Optane PMem can improve their workload performance by up to 2x.

Several Intel partners offer solutions for Optane technology. They include VMware, which has used Intel Optane PMem when running SAP HANA in a VMware vSphere environment. The benefits include expanded system memory resources and a lower total cost of ownership (TCO).

> Skill up: Build your sales acumen on Intel Optane technology for the data center (earn an Intel Competency badge)

> Skill up: Build your technical skills for Intel Optane technology for the data center (earn an Intel Competency badge)