Have you ever seen a $500 million supercomputer? Few people have. But these computing behemoths—there are currently around 500 of them worldwide—work every day to make our lives better.

The newest kid on the block is called Aurora. As you read this, a team of specialized engineers is installing Aurora at the Argonne Leadership Computing Facility in Argonne, Ill.

When they finish, the collective intelligence of partners including Intel, Cray (now part of HPE) and the U.S. Dept. of Energy will have built the first computer capable of operating at 2 exaflops.

That means Aurora will be able to process 2 quintillion floating-point operations per second (FLOPS). A quintillion is equal to 1 followed by 18 zeroes. In case you’re wondering, the average desktop PC is capable of about 63 FLOPS. So yeah, this thing is pretty fast.

Would you like to make your very own exascale supercomputer? Cooking a great meal means starting with the right ingredients. Here’s what you’ll need:

> A cooling system that could nearly freeze the sun

But first, you’ll need to locate a few thousand square feet of space near a reliable power source. The Hoover Dam is a decent choice. Or a nuclear power plant if you’re into that sort of thing.

Next, mount your 10,000 blades in an HPE Cray EX supercomputer. Don’t forget to make sure that your Cray architecture includes Slingshot networking. 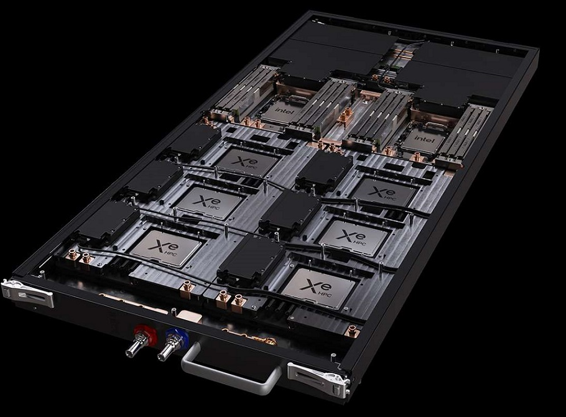 An individual compute node. Aurora will have 10,000

Install your cooling system—make sure to plug it in, this thing gets hot!—and grab a parka.

Post armed guards around the perimeter, because the world’s most powerful computer can be used for evil as well as good. We wouldn’t want North Korea to get any funny ideas.

The curing cancer thing isn’t just a joke. If scientists are going to put an end to the 21st century’s version of the Black Plague, they’re going to need a computer like Aurora, which combines AI with high-performance computing (HPC).

The same holds true for those working to deal with our self-imposed climate crisis, as well some less noble but still helpful tasks.

Need another reason? Here’s a good one: Because we can. We don’t yet know the extent of what a 2 exaflop supercomputer can do for humanity. But we know we can build one, and we know we want to find out.

In other words, the journey is the destination. Designing and building Aurora is part of the evolution of humanity. We want to live longer, fly faster and solve mysteries that have confounded us for centuries. Aurora should help.

There will always be the next supercomputer. Just as Alan Turing’s ground-breaking machine begat the IBM Model 5150, which begat that smartphone in your pocket, Aurora and its ilk are the next steps on our journey to the future of computing.

In the short term, that could simply mean the world’s first 8 exaflops computer. In the longer term, perhaps Aurora begets the (possibly terrifying) sentient machines we all know/fear are coming.

Will Aurora’s great-grandchildren want to enslave us? Or will we be smart enough to build them in a way that keeps the Matrix from becoming a reality, yet endows them with the power to help us all live better?

Those are the kind of questions that compel us to load 80,000 chips into 10,000 nodes and then flick the magic switch to see what happens.