IT infrastructure is moving to the cloud. Contactless payments are here to stay. And publishing technology will never be the same.

That’s some of the latest from leading researchers and IT market watchers. And here’s your tech provider’s research roundup.

Providers of IT infrastructure gear for the cloud are sitting pretty. Worldwide sales of servers, storage devices and Ethernet switches used for public and private clouds rose more than 9% year-on-year in this year’s third quarter, according to market watcher IDC.

Looking just at infrastructure gear for the public cloud, those sales rose in Q3 by an even higher 13%, IDC says.

By contrast, worldwide sales in the same quarter for infrastructure gear not used for the cloud dropped, and by more than 8%.

Looking ahead, IDC believes the hardware infrastructure market has reached a tipping point. As shown by the chart below (courtesy of IDC), cloud environments will continue to account for the majority of IT infrastructure spending. 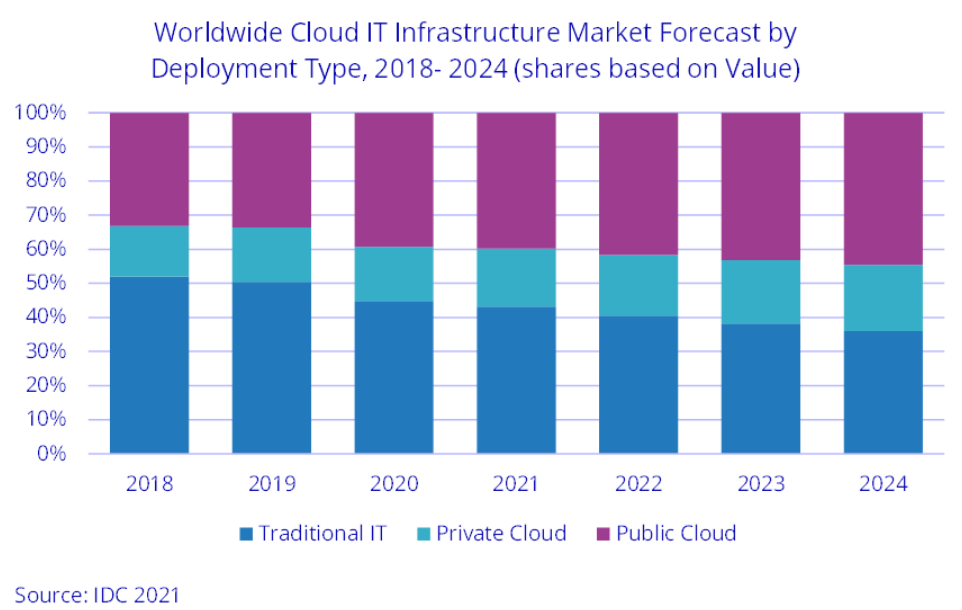 Among the beneficiaries of the rise in cloud IT infrastructure spending are Dell with a Q3 market share of 15%, HPE with an 11% share, and Inspur with a nearly 9% share, IDC says.

One of the many technologies that have gotten a boost from the pandemic is contactless payments. Mainly because, in a retail store setting, the technology lets customers keep a safe, social distance from sales clerks.

To find out how pervasive the technology’s adoption truly is, credit-card provider Visa recently surveyed 250 owners of small and midsize businesses, all with no more than 100 employees, in 9 countries. Visa also surveyed 1,000 adult consumers in 8 countries.

Here are some of the survey’s recently released findings on contactless payments:

> 8 in 10 (82%) SMBs have embraced new forms of technology to meet changing consumer demand. That’s up from 67% as recently as last summer.

> About 4 in 10 SMBs now accept new digital forms of payment. Looking ahead, nearly three-quarters (74%) of SMBs expect consumers will continue to prefer contactless payments, even after a vaccine is widely available.

Publishing tech: no return to normal

The pandemic has affected some industries more than others, and among those really feeling the effects is publishing.

The Reuters Institute for the Study of Journalism recently conducted a survey to learn more. It questioned more than 50 editors-in-chief, 45 CEOs or managing directors, and nearly 30 heads of digital, all of whom work for either traditional media companies or “born digital” organizations worldwide.

Here’s some of what they uncovered:

> Three-quarters (76%) of the publishing execs say Covid-19 has accelerated their plans for digital transition. These plans include remote working and new, reader-focused business models.

> Three-quarters (76%) of the execs also described driving digital subscriptions as either important or very important to their revenue focus.

> More than two-thirds (69%) of the publishing execs say their companies are investing in artificial intelligence. They expect AI will help them to deliver more personal experiences and improve production efficiency.