Known as the Intel Ethernet Network Adapter E810-2CQDA2, the new adapter delivers up to 200 gigabits per second (Gbps) of bandwidth in a PCIe 4.0-compliant server. Each QSFP28 port supports up to 100Gbps, providing the throughput and functionality of two 100Gbps adapters in a single PCIe 4.0 slot. 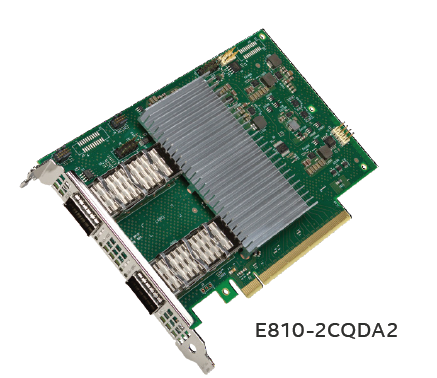 Intel set out to match the bus (PCIe 4.0) with the bandwidth (Ethernet network speed). This new adapter, by taking advantage of the increased bandwidth, balances platform performance and helps ensure the network isn’t a bottleneck. It’s all about getting a balanced platform.

Support for PCIe 4.0 is important. This latest iteration of the PCIe interface basically doubles overall throughput, when compared with 3.0.

Intel’s new network adapter is available from tech distributors, resellers and other channel partners. Also, several hardware OEMs are bringing to market servers based on the 3rd Gen Intel Xeon Scalable processors. Some of these OEMs plan to support as many as 6 of the new Intel network adapters in a single server, bringing a physical server’s maximum throughput to 1,200 Gbps.

From the perspective of both the server OS and the user, the Intel Ethernet Network Adapter E810-2CQDA2 appears as 8 physical network adapters. That also means it can handle 8 separate networks.

Like other members of the Intel Ethernet 800 Series Network Adapter family, the new E810-2CQDA2 supports several key technologies from Intel. These include:

> Ethernet Port Configuration Tool: EPCT lets the user program each port to act as a separate physical adapter. There are many possible configurations, including 2 x 100Gb, 4 x 50Gb, and 8 x 25Gb.

> Remote Direct Memory Access: RDMA enables 2 machines on the same network to exchange memory without involving the operating system or the processor, further reducing latency. Both iWARP and RoCE v2 are supported simultaneously.

Security is provided using several methods. These include Zero Trust, which essentially means every server request, whether from inside or outside the network, must be verified to determine whether access should be granted.

These features include corruption detection and automated device recovery. If a device is attacked or corrupted, these features enable it to return to its originally programmed state.

Tell your data-center customers about Intel’s latest server processors and network adapters. Together, these components are powering the new generation of servers your customers need today.