Cryptocurrencies and NFTs (short for non-fungible tokens) are in the news nearly every day. Yet few people understand how they work, much less how to take advantage of them.

For those in the know, investing in a blockchain staple such as Bitcoin or Ethereum could be a smart financial play. Options include purchasing, accepting or even “mining” cryptocurrency. (More on mining below.)

Are you or your customers in need of a blockchain primer? If so, read on. And let your mind wander along a path that could lead to added security, efficiency and perhaps even untold riches.

Blockchain is a way to prove the truth.

The truth you intend to prove could be just about anything. You could use a distributed ledger like blockchain to verify a cryptocurrency transaction, the purchase of an NFT, or a vote for an elected official.

The “block” of a blockchain refers to a snippet of code that describes one or more individual transactions. Put together two or more of these blocks, and you’ve formed a “chain.”

However, trust can be hard-won when strangers are trading billions of dollars’ worth of ones and zeroes. That’s where blockchain’s decentralization and cryptographic security come in.

A new kind of lock & key

Blockchain’s inherent decentralization ensures that no single entity — whether the federal government or a mustache-twirling robber baron — can control or corrupt what’s being protected.

Instead, a blockchain creates a constantly evolving record of all transactions. What’s more, this record exists not in one central location, but instead on myriad privately owned computers, known as nodes, located around the world.

Each node competes tirelessly to collect, authenticate and ultimately add each new block. This competition is known as mining. Nodes that successfully win the right to add a new block to the chain get a reward, usually in the form of the currency they’re keeping track of.

Make no mistake, this can be a lucrative endeavor. But it’s also far from easy.

To maintain security, blockchains such as Bitcoin use hashing, a cryptographic technique that dates back to the 1950s. Hashing creates a long string of algorithmically determined characters from any piece of data. In the case of Bitcoin, these data are the transactions between buyers and sellers.

To help ensure each hash is genuine, a block also stores the hash of the preceding block. It’s the nodes’ job to test the authenticity of every new hash, a herculean effort that takes a metric ton of processing power and energy.

Now here’s where the rubber meets the road: Changing even the smallest piece of a block’s data will change the entire hash. So if a ne’er-do-well were to alter some code in an attempt to cheat the system, the hash would no longer prove the authenticity of the block it came from.

In that event, the nodes would see the bad hash and refuse to authenticate the block. The result would be a voided transaction at best, prison time for that ne’er-do-well at worst.

Where do NFTs come in?

You can think of an NFT as a digital coin with a difference: Instead of representing a type of currency, the way Bitcoin and Ethereum do, an NFT represents the authenticity of a piece of virtual property. That could be a graphic, an audio file, or even the short tweet (“just setting up my twttr”) that Twitter CEO Jack Dorsey recently sold for an amazing $2.9 million.

Here again, the key to a successful transaction is trust. As it happens, the creators of Ethereum have been willing to lend their trust to the burgeoning NFT market.

They did this by updating the Ethereum blockchain. Now Ethereum can track and authenticate more than just its native currency, Ether. This change to the code base gives digital content creators the ability to demonstrate their guaranteed ownership of a unique, original work. That’s important when they’re communicating with potential buyers. 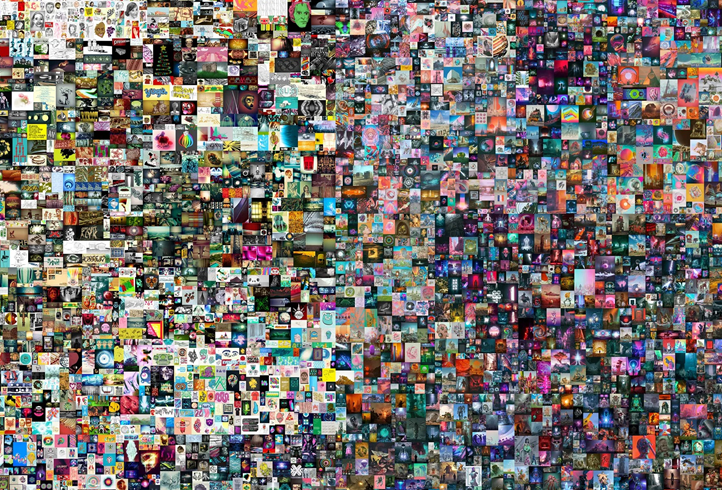 But couldn’t you just make your own copy of their art? Sure. Today, a copy of Beeple’s “Everydays — The First 5000 Days” is as easy to come by as an image of Monet’s famous water lilies. But Beeple’s work will still have only one true owner—whoever bid that $69 million this past March at Christie’s.

Are we rich yet?

Some of us are, and some of us ain’t. If you were savvy enough to buy a few dozen Bitcoins back in 2009, when they were first introduced, then hold them for a while, you’re probably reading this on the beach while sipping an ice-cold mai tai.

The rest of us will have to keep looking for opportunities to leverage blockchain technology. These opportunities could be as banal as a trusted accounting system. Or as fantastic as a successful Initial Coin Offering (ICO) of your very own (see Dogecoin).

One thing is certain: We’re witnessing the dawn of a new city of gold. And this is just our first trip around the block.