The metaverse promises to be technology’s next big thing.

How big? Well, researchers at Citi Global Perspectives & Solutions believe that by 2030, the metaverse could present a commercial opportunity of $8 trillion to $13 trillion, and have around 5 billion users.

But those numbers are so big, there’s not you can do with them. Far better, says ABI Research, is to measure the total addressable markets (TAMs) within 7 market segments of the media and entertainment market.

In a new report, ABI says that when viewed together, these 7 markets can serve as metaverse building blocks:

The number of active users in virtual spaces worldwide will rise from 118.3 million in 2021 to 1.05 billion by 2023, ABI forecasts. If correct, that would mark a compound annual growth rate (CAGR) of 27%.

This growth should also translate into higher revenue. ABI predicts that virtual-spaces revenue will rise from $4.2 billion in 2021 to $44.8 billion by 2030 (see chart below, courtesy of ABI). 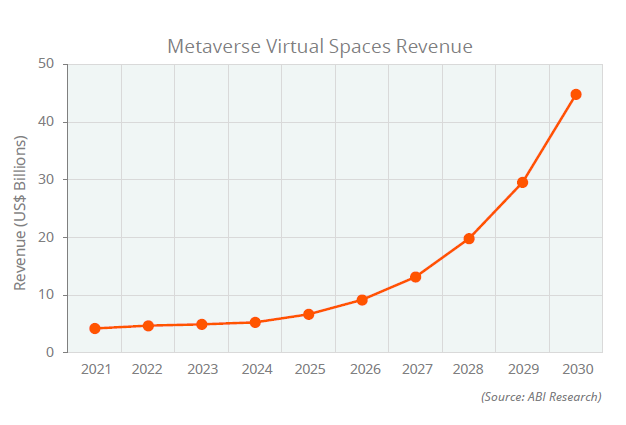 And that’s excluding transaction volumes for non-fungible tokens (NFTs) and augmented and virtual reality (AR/VR) revenue. Together, they could contribute billions of dollars of additional revenue, ABI says.

It’s not exactly the metaverse, but ABI makes the case that the kind of control consumers gain by streaming video will make it easier for metaverse suppliers to reach them. So will the arrival of smart glasses, which ABI expects to see well before 2030.

The number of video-streaming viewers will rise from about 3 billion worldwide last year to nearly 5 billion in 2030, ABI predicts.

In a sense, gamers are already in the metaverse with virtual gaming spaces. Also, gamers have already accepted a digital-first market and are willing to pay for digital assets and goods.

ABI predicts that the number of videogame players worldwide will rise from nearly 3 billion last year to about 4.5 billion in 2030.

A subset of the overall gaming market, cloud gaming involves, you guessed it, games played in the cloud. This plays into the metaverse concept with increased access to content and services, and heightened opportunities to push content and services into public spaces.

ABI expects the number of cloud-gaming players worldwide to rise from fewer than 100 million last year to nearly 800 million by 2030.

It’s a market made up of 4 submarkets: online video, social networking, search and digital gaming. Not exactly the metaverse, but ABI says this market could serve as a TAM in which new revenue could come from the adoption of virtual spaces and business models (Web3, blockchain, etc.).

It should be a fast-rising market. ABI forecasts global cloud-content revenue increasing from about $750 billion last year to nearly $2 trillion by 2030: 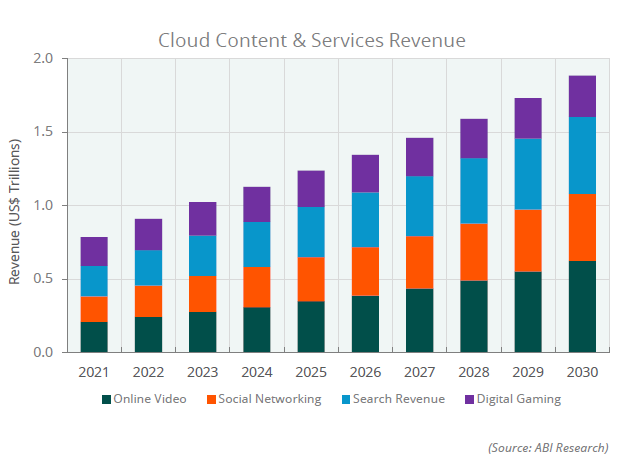 The metaverse promises to merge the physical world with virtual spaces. To do so, ABI says, it will build on the work being done by advertisers in digital identities and data management.

For example, privacy concerns are likely to drive changes to advertising tracking and push the industry into self-sovereign identity. Again, this will help build a foundation for the metaverse, where privacy concerns will no doubt be important.

Worldwide revenue from digital ads will rise from about $500 billion last year to $1.3 trillion by 2030, ABI predicts.

The metaverse could change the way people work by delivering virtual spaces where people can meet and collaborate. ABI predicts that revenue from collaboration and related services will more than double over the decade, rising from $24 billion in 2020 to $64 billion in 2030.

Other related services include virtual headquarters, which replicate the in-office experience online. Current examples include Teamflow and Virbela. There are also virtual events, which replace in-person confabs with webinars, immersive meeting spaces, virtual conferences and more.