When is retail going back to the way it used to be? It’s not. The changes brought about by the pandemic, including consumer behavior, are here to stay.

That also includes technology. According to a new report from management consultants McKinsey & Co., “In a matter of 90 days, we have vaulted forward 10 years in consumer and business digital adoption.”

The new report, entitled “Retail reimagined: The new era for customer experience,” is based on Periscope by McKinsey’s survey of more than 2,500 consumers in the United States, UK, France and Germany. Survey results were collected both before and during the current pandemic lockdown.

One of the biggest shifts the survey found is around customer loyalty. Overall, 40% of respondents told McKinsey that they had either tried new brands or actually made purchases with a new retailer. In the U.S. alone, the figure was an even higher 46%.

Another big shift is the rise of e-commerce. Retail spending online rose by over 30% among U.S. consumers from March through mid-April, compared with the year-earlier period. Yet during the same time, overall retail spending dropped.

What makes a great retail browsing experience? To find out, McKinsey surveyed consumers twice, once in early March, and a second time in early June. As you can see in the following chart (courtesy of McKinsey), U.S. consumer sentiment shifted.

Note - The black bars show the response in March; the blue bars, in June. The large figures above the bars show the percentage change from the first poll to the second. 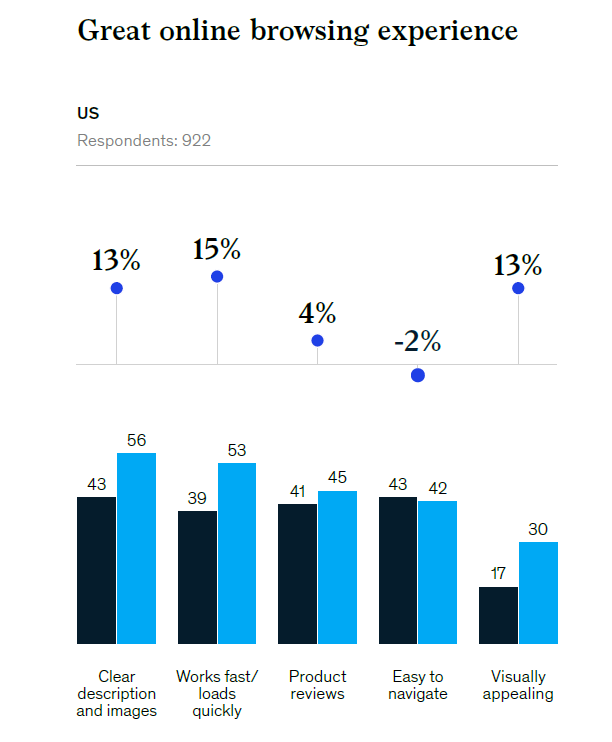 How about in-store tech? That’s important as retailers try to get shoppers to return to their brick-and-mortar locations.

Unfortunately, when it comes to in-store tech, McKinsey found that retailers are doing a poor job of communicating with their customers. More than one in three consumers said they’ve had zero exposure to any digital options. Zero!

When asked about specific in-store technologies, the answers weren’t much better. Only about one in four (23%) said they noticed or used mobile payments. And only 13% said they use mobile pre-orders, in which a customer orders a product from home using a mobile app, then picks up the product at a physical store.

What should retailers be doing now? Here are 3 recommendations from the McKinsey report’s authors:

> Deliver hyper-local and personalized experiences: This needs to be done both in stores and online. It will require a deep, granular understanding of customers and their “decision journey.”

> Reboot customer loyalty online: Now is a once-in-a-generation opportunity to recapture and win back customers, McKinsey says. Digital experiences have to be “zero friction.” Loyalty programs need a reboot, too, balancing monetary awards with experiential offerings.